Here’s a sneak peek from the conversation between Andrew Zonneveld and Modibo Kadalie in Deciding for Ourselves: The Promise of Direct Democracy, edited by Cindy Milstein. 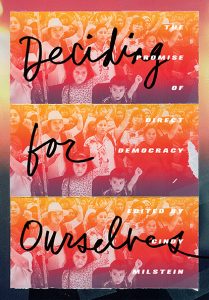 Modibo Kadalie: For me, direct democracy is an evolving social vision. My ideas, just like anyone else’s, are always developing. In the 1960s and early 1970s, I saw myself as someone who understood race and class, and the dynamics of each, and I was toying with the question of labor and its role in society. The most perplexing question for me, however, was the role of the state. My only political vision at that point in my life was that of a socialist nation-state ruled by the working class, which is what most Marxists desired at that time. This state socialism was supposed to represent the next stage of human social and economic development. Of course, this nation-state was supposed to be large and highly centralized, like the kind we saw in the USSR or China then. And part of that vision was a conception of na­tionalism that coincided with the emergence of the postcolonial, third world states.

Obviously I no longer hold many of the views that I held then because eventually I began to see that these big, massive, bulky nation-states were contributing to the problem of social oppression, and the emerging postcolonial nation-states of Africa, the Caribbean, and elsewhere in the third world were not solving any problems for their own people. So I started to look at more localized and directly democratic conceptions of socialism, and more intimate forms of democracy, where people could look at themselves and each other, face-to-face, and solve their problems collectively. That’s direct democracy to me. I began to see how that tradition was long established in many places around the world, but it was not being recorded.

Direct democracy is also meaningless, though, without a clear understanding of social ecology. We must take to heart all the implications of the assertion articulated by [social anarchist and theorist] Murray Bookchin that, to paraphrase, “there is a social crisis at the basis of every ecological crisis” or “every ecological crisis is in reality a social crisis.” Consequently, ecological crises expose social crises. It follows that societies that are organized hierarchically and based on for-profit markets cannot solve or even adequately address any ecological crisis. What is more intimate and integral to our lives and future, after all, than the directly democratic control over our immediate environment and living space? That’s the air we breathe, the water we drink, and the food we eat!

We must learn to democratically control the spaces that we inhabit, to expand and take responsibility for them. We can no longer afford to allow others to do this for us. We must learn to do this for ourselves in concert with our neighbors and other communities, which can happen through directly democratic town hall meetings, assemblies, and other popular forums that are empowered to make decisions.

Andrew Zonneveld: Would you say this was a gradual or dramatic shift in thinking for you?

Modibo: It was dramatic because I also started to see that the people who were articulating the postcolonial vision really did not understand the future of the world. Their ideals were driven more by political expediency than by real critical analysis of the situation. I began to see that the politics they were articulating was also self-perpetuating, since everyone was a part of various Marxist parties and other organizations, none of which seemed to be contributing much insight to the new problems and contradictions that were emerging.

There were two important questions that were not dealt with by these institutions. First was the question of gender and women’s liberation. Second was the ecological question, which was largely ignored by many people in these movements. There were struggles against nuclear proliferation at the time, however; for me, that’s where I saw the modern ecological movement begin. But ecology did not come into play in most people’s analysis of capitalism, racism, or colonialism back then. There were no debates or conversations about it at the time, as far as I could see….

[T]hat’s where I began to see the relationship between direct democracy and social ecology. I saw direct democracy as the way toward a decentralized, localized, federated type of socialism, and came to the conclusion that in order to understand democracy in its fullest dimension, we also have to understand social ecology. When Bookchin advanced the idea that human society was a part of the natural world, since it was created by human beings as they evolved, that was helpful for me. That is to say, the question of how humans relate to the rest of the natural world must be incorporated into how we understand the future of labor, race, sex, and class. So my vision of direct democracy and social ecology evolved in a symbiotic relationship with one another. A directly democratic vision of social prog ress involves a social ecology and direct democracy where people are engaged in a process of healing with the earth, as both have been scarred by capitalism. Of course, there was certainly ecological destruction prior to capitalism, but there’s really nothing like capitalism when it comes to ecological degradation and catastrophe. The scale is so massive that it’s almost hard to comprehend.

[excerpted from Deciding for Ourselves: The Promise of Direct Democracy.
Another version of this interview—and more from Modibo—appears in
Pan-African Social Ecology: Speeches, Conversations, and Essays.]