The Eclipse of Dreams [excerpt]

Posted on May 25th, 2020 in AK Book Excerpts, Current Events 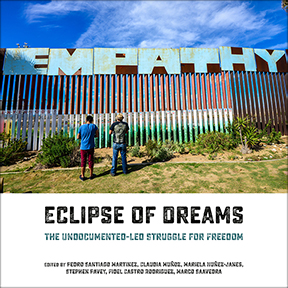 As its subtitle implies, Eclipse of Dreams: The Undocumented-Led Struggle for Freedom, which we published earlier this month, is about the experiences of undocumented immigrants as well as what those experiences have to teach us about all struggles for liberation and justice. The following excerpt from the book’s “Prelude” section shares a central epiphany that informs the book: the realization that legislative battles—in this case the fight for the DREAM Act—can derail social movements, to the extent that they wind-up advocating for things that undermine families, communities, and the movements themselves.

The morning for the important vote on the DREAM finally came. By 9:00 a.m. the Senate gallery was largely full. The Senate was called to order and then a prayer was offered for wisdom for our legislators, that they would be “turned away from false solutions.”[1] Two hours passed as senators took turns speaking to either the DREAM Act or the Don’t Ask, Don’t Tell Repeal Act. We listened to people with fears of illegals crossing our borders, calling this bill “amnesty” and a reward for criminal behavior. Others pleaded on behalf of the DREAMers, explaining that it was through “no fault of their own” that they were in the U.S. without papers. As we heard the voices of supposed support some of us cringed in our seats. If the DREAMers were not at fault, then who is to blame? Our parents? The case for the DREAM Act was made by painting a picture of DREAMers as model citizens deserving of a path toward legalization. Supporters described DREAMers’ potential to add to the U.S. economy through their hard work. They said that DREAMers “played by the rules and only want to achieve the American Dream.” Senator Durbin pointed to the Senate gallery and made a case for the DREAM Act by telling those present, look, “they are valedictorians, captains of teams, leaders of their communities … possessing high GPAs, sciences degrees … why would you deny them a chance to make America a better place?”[2]

Two and a half hours after the Senate was called to order, at 11:31 a.m., the chair reminded the gallery that “expressions of approval or disapproval are not permitted.” Around the gallery we all held each other’s hands. The fate of the DREAM Act, our fate, was clear as we watched each Senator come forward to cast their vote, some very visibly with their thumbs down. “The motion is not agreed to.” The DREAM Act died, just five votes short of the sixty needed to advance the bill.

It was so close. There was a visible numbness among us, a shock that immediately gave way to tears and strong embraces across the gallery. What now—now that we witnessed this eclipse of dreams?

Some of us were physically present at the senate gallery other of us watched from afar. Together we experienced the euphoria of possibilities and the despair of disappointment.

Fighting with Our Own Shadows: Journeys of Faith 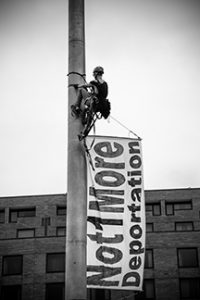 In other places and times, an eclipse warned of imminent danger, disaster, even the end of the world. The failure of the DREAM Act felt like this. Yet in the darkness of this moment, it did not take long to see a glimpse of light. Maybe, just maybe, the eclipse was a warning to us. What if our dreams, the very scope of our horizons, what we hoped for ourselves and others, was limited by the framework in which we expressed them, the American Dream itself? What if, out of our real pain and desire for freedom, we had become pawns in a system where freedom is an illusion? Did we lose track of our ends and compromise our means because of this dream framework? What if United We Dream and the political-economic power behind those that claimed to represent us under a united dream were never united and confused dreams with lies? What if, from the outset, our framing of the issue, our struggle for freedom was itself problematic? In the darkness, we began to realize that the search for a solution to the immigration problem, when mired in the rationale of the American Dream, was part of the problem.

As we asked ourselves these questions and contemplated the end of our world, the end of the dream, we began to follow the light that we had found in our own lives and the love within our community and shared struggle for freedom. We began to understand the lives and choices of our parents as filled with dignity and courage. Instead of blaming them, we praised them for their faith to risk everything for their children. And now that darkness eclipsed our personal dreams, we saw the absurdity of what W.E.B. Du Bois described as the “strong man,” the DREAMer, “fighting to be free in order that another people should not be free.”[3] We were beginning to see that the dream for collective freedom and the dignity of all humanity was not only a greater dream but one in conflict with the American Dream.

What passed as an eclipse was possibly a reminder that what was lost, had it been won, might have truly destroyed us. We might have won our access to the American Dream, at the expense of the greater struggle for our freedom. “Uncle” Vincent Harding would later tell us that it was lazy journalists and historians who had framed what was a Black-led struggle for freedom as a “civil rights” movement, attempting to squeeze something vast into a legislative straitjacket.[4] Similarly, Michelle Alexander challenged us to consider what was lost, when we celebrated the granting of certain civil rights by embracing a politics of respectability.[5]

We were reminded of what we were learning in the dark when President Barack Obama spoke to the nation just a month after the DREAM Act’s defeat, saying, “Today, there are hundreds of thousands of students excelling in our schools who are not American citizens. Some are the children of undocumented workers, who had nothing to do with the actions of their parents … as soon as they obtain advanced degrees, we send them back home to compete against us. It makes no sense … let’s stop expelling talented, responsible young people who could be staffing our research labs or starting a new business, who could be further enriching this nation.”[6]

For the “strong man,” the perfect Dreamer, to gain rights meant that the bad Dreamer was deportable and, further, that the “illegal” dreams of the perfect Dreamer’s parents were worthless. We began to see that the criteria for the DREAM Act re-inscribed and re-enforced race and class barriers to inclusion in this society. The DREAM Act would bar the rest of the undocumented community from becoming free. The American Dream came with great costs. 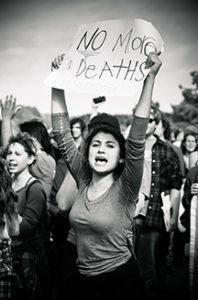 We continue to search for light and discover hope in the darkness. James Baldwin may best describe what we learned: “Any real change implies the breakup of the world as one has always known it, the loss of all that gave one an identity, the end of safety. Yet, it is only when a man is able, without bitterness or self-pity, to surrender a dream he has long cherished or a privilege he has long possessed that he is set free—he has set himself free—for higher dreams, for greater privileges.”[7] This greater privilege is the struggle for our collective freedom, for our collective humanity, for our collective dignity. Du Bois warned us that the great tragedy of our time for undocumented families, for this nation and the world, is not poverty, wickedness, or ignorance, but that humans know so little of humanity.[8]

In the next pages, we invite you to learn about our journeys through the darkness as we search for light after the eclipse of dreams; to learn, through our stories of struggle and fear, of living “illegal,” a little more about what it means to be human, to discover dignity, and what it might mean to shed light on our global humanity.

You can purchase a copy of Eclipse of Dreams: The Undocumented-Led Struggle for Freedom here.

[3] W.E.B. Du Bois, The Autobiography of W.E.B. Du Bois: A Soliloquy on Viewing My Life from the Last Decade of Its First Century (New York: International Publishers, 1968), 146.

[6] Barack Obama, “Remarks by the President in State of Union Address,” transcript, https://www.whitehouse.gov/the-press-office/2011/01/25/remarks-president-state-union-address.