Resist Everything Except Temptation. An excerpt from Kristian Williams’s new book! 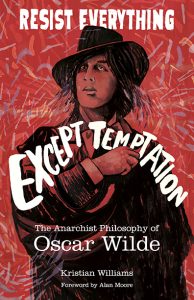 We’ve just released Kristian Williams’s newest book, Resist Everything Except Temptation: The Anarchist Philosophy of Oscar Wilde. It’s an incredibly fulfilling read about a fascinating writer, in which Wilde’s wit, aesthetics, and politics come to life in ways we’ve never seen in a work of literary criticism. Below is a short glimpse that should give you an idea of how Kristian approaches his subject.

If you’re tempted, you can get the book here at 25% off for it’s first few weeks of existence. Enjoy!

In his most famous political tract, “The Soul of Man under Socialism,” Oscar Wilde advocates for an anti-authoritarian socialism, which would serve the cause of individualism and bring about a cultural rebirth.

The society Wilde imagines is one in which the arts, the sciences, and the whole of intellectual life prospers; a society without property, prisons, or crime—in which no one is hungry and machines do all the dirty, distasteful, tedious work. It is a society in which everyone is free to choose his own path and flourish in her own way, to prosper not in petty financial terms but in terms of character and personality. “The true perfection of man lies not in what man has, but in what man is,” Wilde wrote. This socialism, which will produce “true, beautiful, healthy Individualism,” will free us, not only from the dangers of poverty but from the demands of wealth as well: “Nobody will waste his life in accumulating things, and the symbols for things. One will live.”[1] In this essay Oscar Wilde makes many striking pronouncements, among them: “the form of government that is most suitable to the artist is no government at all”; “there is no necessity to separate the monarch from the mob; all authority is equally bad”; and “all modes of government are failures.”[2]

Wilde’s is a socialism in the service of individualism. It is a socialism based more in aesthetic ideals than in economic theories. It takes as its model the artist rather than the proletarian and is as much concerned to free the repressed bourgeois as the oppressed worker. Its tastes are aristocratic; its ethics, bohemian. It is at once deeply spiritual and thoroughly heretical, ethical and antinomian, rebellious and harmonious, egoistic and universally compassionate, urgent and utopian. It is, in a word, anarchism. Yet the word does not appear anywhere in Wilde’s essay. Instead Wilde expressed indifference, almost disdain, for ideological labels. (“Socialism, communism, or whatever one chooses to call it,” he begins one paragraph.)[3] Does Wilde deliberately avoid the word anarchism because of its sectarian connotations? Or is he issuing a subtle snub, siding with William Morris against David Nicoll in the dispute that had recently divided the Socialist League?[4] Or is it perhaps something greater—that no label is needed or that none will suffice?

“The Soul of Man under Socialism” has long been accepted into the anarchist canon. In the first decades of the twentieth century, millions of copies sold in Europe, and revolutionary groups distributed it in the United States.[5] Emma Goldman advertised it in the back pages of her magazine Mother Earth, along with works by Peter Kropotkin, Edward Carpenter, William Morris, Thomas Paine, Friedrich Nietzsche, and Leo Tolstoy.[6] George Woodcock considered Wilde’s essay the “most ambitious contribution to literary anarchism during the 1890s,” and his Porcupine Press released a pamphlet version in 1948.[7] Robert Graham includes it in his expansive collection Anarchism: A Documentary History of Libertarian Ideas.[8]

But “The Soul” has largely been set apart from Wilde’s other work, treated as a single, inexplicable foray into the serious, unironic, political world, having no bearing on and no relationship to his poetry, plays, and fiction. It has thus occupied a somewhat marginal position in the overall body of Wilde studies. And the rest of Wilde’s writing has for the most part escaped the attention of anarchist readers. It is thought to be a trivial curiosity that the author of “The Soul of Man under Socialism” and the author of The Picture of Dorian Gray happen to be the same person. In fact, for all the attention given this connection, they might as well have not been the same man but instead two men with the same name. This division, I believe, is a mistake, whichever way one looks at it. If we take Wilde’s politics seriously, if we put “The Soul of Man” first, so to speak, and refuse to sever it from the rest of Wilde’s work, then certain important connections inevitably become apparent. The political implications of his drama, verse, fiction, and especially his essays, criticism, and lectures suddenly stand out sharply. And the aesthetic, Hellenic, spiritual, and queer elements of “The Soul of Man” simultaneously take on a new import.

In this volume, I seek to identify the values Wilde advanced in his works, the ideals often implicit in his literary writing and sometimes explicit in his essays. By putting the politics first, it is possible to find a kind of unifying outline for Wilde’s thought as a whole. His politics connect to his aestheticism, to his sexuality and nationality, to his humor and irony, and to his deeply tragic view of life. Wilde’s political commitments were subtly but centrally present in even his purely aesthetic works; and conversely, his aesthetics, his critical perspective, and even his keen wit and sense of irony had their role in shaping his politics. At the root of Wilde’s thought was a deep belief that individual freedom is desirable both for its results and for its own sake, that such freedom requires creativity and pleasure, and that it can only be achieved when our basic needs are met, ideally through an economic socialism that unites a diverse community on terms of fraternal equality.

The following chapters are arranged, broadly speaking, chrono-thematically, grouping Wilde’s ideas by subject but ordering them to trace the development of his thought. Put in very simple terms, they cover violence, aesthetics and labor, women, homosexuality, prison, and Wilde’s legacy. These subjects are related, in turn, to Wilde’s first play, Vera, or the Nihilists, and his collection of stories, Lord Arthur Savile’s Crime; his American lectures and his fairy tales; the society plays; The Portrait of Mr. W. H. and the trials; his prison letters and “The Ballad of Reading Gaol”; and, finally, Salomé and Wilde’s grave.

Wilde’s work, it turns out, is dense with politics. If we fail to perceive its political aspects, we misunderstand much of the rest of it. But if we try to isolate the “political”—his views about government policy or economic arrangements—we fail, rather sadly, to comprehend his vision at all. For philosophy, politics, and art—these were not, to Wilde, separate concerns or distinct pursuits. They could not be divided without harm. The principle of their unity is what he would call beauty; the expression of this unity is what might be called art—or life.

[3] Ibid, 1175. Walter Crane, who illustrated Wilde’s book The Happy Prince, later recalled: “The essential difference between anarchist and socialist ideas and aims was not then very well understood or generally recognized, especially as both schools could join in their protests and denunciations of the existing economic order.” Walter Crane, An Artist’s Reminiscences (New York: Macmillan, 1907), 259. I have written elsewhere about Crane’s likely influence on Wilde’s essay. See Kristian Williams, “The Roots of Wilde’s Socialist Soul: Ibsen and Shaw, or Morris and Crane,” Oscholars, Spring 2010, oscholars.com.