Excerpt and Table of Contents from A COMMUNISM OF LOVE, by Richard Gilman-Opalsky

Richard Gilman-Opalsky’s new book, The Communism of Love: An Inquiry into the Poverty of Exchange Value, is nearing it’s release date. Below is an excerpt, followed by the table of contents. You can also order a copy (at 25% off) here. 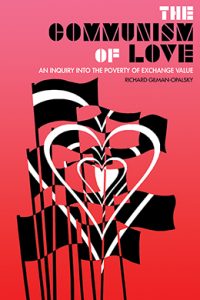 This book is about the communism of love. It is, in other words, about the necessarily and irreducibly communist form and content of love. The chapters of this book travel far, but are held together by an overarching argument about love as a communist power. At the same time, this book is an inquiry into the poverty of exchange value. By “poverty of exchange value” I mean that the capitalist mode of assessing value is incapable of appreciating what human beings—everywhere on Earth—value the most. For all of its multifarious meaning, love reveals the limits of capital to appropriately value the experiences and relationships that human beings treasure most in the course of a life. Yet, most human life is subordinated to exchange relations. In recent decades, the logic of capital has been increasingly extended to the administration of love in ways previously unimaginable. But capital only succeeds in commodifying love by destroying it, by converting it into an impoverished “false form” (i.e., a spectacle) of itself. We will have to say what is specifically meant by love, a task that defines the first three chapters.

The Communism of Love moves from a cautious exploration of love as a political concept to the argument that love is a practice of relationality incommensurate with capitalist exchange relations. Human relationality is formed in our worldly intersubjectivity, and what shapes our relationships with others can be (and often is) far more valuable than those relationships established by capitalist exchange relations. The nature of a social relationship is and can be variegated and emotionally and constitutively diverse. However, Harry Cleaver observes:

Capitalists, unfortunately, try to organize this kind of relationship in ways that give them power over us. They seek to impose our relationship to them to such a degree that we come to define ourselves, and are defined by others, primarily in terms of our jobs… In actuality, of course, we may do and be a great many things, but within capitalism the expectation is that we will identify with our work.[1]

Whatever else we are and whatever else we do, besides and beyond our work, is best seen, appreciated, and understood, in relations of love. People usually do not want their entire identity determined by what they do for money. In contrast to the global power of capital, global aspirations for love challenge and displace relations of life governed by the logic of capital.

Because the present book draws on a vast bibliography including not only philosophy and political theory, but also psychoanalysis, social psychology, theology, and sociological theory, readers may expect some kind of a full sweep or promise of exhaustive understanding. Such readers should be disabused of that expectation from the start. I am essentially offering a critical and substantial development of Erich Fromm’s old theory of love in the light of more contemporary social, political, technological, and psychoanalytic research, and perhaps most importantly, in the context of present currents in twenty-first century Marxist philosophy. However, there are also aspects of this work that aim at a longer historical view and broader context, which can be seen for example in Chapter 2 on Plato’s Symposium.

But, in what ways will we think about love beyond what has already been said by philosophers from Plato to Fromm, bell hooks, Alain Badiou, and so many others who have written a vast bibliography of love? There are four basic distinguishing features of the present study, and far more in the particularities. Generally:

First, I bring together interdisciplinary sources on love that have never been synthesized in a single study. Such a synthesis will be contextualized and proven necessary for both appreciating and moving beyond the tendencies and deficits prominent in the literature’s history. Too many theories of love (indeed all of them) ignore the other major studies of love to their own detriment.

Second, I claim that love is a practice that socializes a unique polyamory beyond the structure of romantic relationship. This polyamory is not about having multiple partners, and is not primarily sexual or romantic, but is instead the polyamory of a communist affection for others. I argue that the human aspiration to love expresses a longing for a form of communist relationality. This can be demonstrated whether or not one recognizes the communism of their own relationships. In this way, I shall muster the courage speak of the universality of at least one communist tendency (the communist tendency of love).

Third, I argue for the desirability and practicality of a logic of human relations that is irreducibly antagonistic to capitalist exchange relations. If everyone who aspires to love aims, through that peculiar aspiration, to separate and defend their most cherished relationships from the exigencies of capital, then no capitalist totality can be fully realized. Capitalism, as both an ideological position and as an actual power that organizes life, cannot satisfactorily encompass the psycho-social and emotional needs of everyday people.

Fourth, I argue that revolts and other disruptive social and political movements are always, at least to some extent, concerned with the creation or restoration of relations of love against a monetized life of exchange relations. In revolt and other social, political, and cultural movements—and indeed, in a wide range of global uprisings—love is often wielded as a non-militaristic weapon, or rather, as a threatening sensibility. Love activates a sensibility about being with other people that is antithetical to capitalist reasons for being-with-others.

Of course, all of this and more will need to be substantiated. But the conclusions of The Communism of Love are far from obvious and far from common understanding. Take the example of a major rival in the philosophy of love, Martha Nussbaum, non-controversially one of the most influential philosophers in the world. Nussbaum wrote a philosophy of love in her Political Emotions: Why Love Matters for Justice (2013). Nussbaum assumes we can pursue a politics of love that will lead to increasing justice, the latter being fully compatible with the capitalist organization of society. In contrast to Nussbaum, the present study offers a refutation and rejection of both liberal and conservative conceptions of love as a force of justice within existing capitalist societies, and argues instead that love is either a communist power, or it is not love in fact. We shall also explore major disagreements with Erich Fromm, Axel Honneth, bell hooks, Eva Illouz, Alain Badiou, and Hannah Arendt, among others.

There is a way in which this book attempts to address one of the concluding questions posed by Kathi Weeks at the end of her book Constituting Feminist Subjects. There, Weeks asks

what are some of the different ways to conceive a collective subject, ways that move beyond the liberal model, according to which the individual is primary and authentic, the group is a “mere” secondary construction, and a legitimate group is posed as a consensual aggregation of individuals? Given the pervasiveness of liberal individualism and its stubborn grip on our thinking in late capitalist societies, this remains a difficult task indeed. What are some of the possible ways of regarding collectivities not only as determined subject positions but also as active subjects—how can these subject positions be transformed into relatively autonomous agents capable of social change?[2]

What we are trying to do is to understand the possibility of a real collective subject that is not secondary to the individual, because—among other reasons—the individual’s personality is realized only in dialectical relations with others around her. The individual is developed within that sociality, and does not precede it. But, since so much of social relations are determined by the capitalist mode of life and work, we cannot answer the question of the collectivity with a simple sociological truth. We are not looking for a collectivity that is the determined subject position of capitalist society, but rather, we are looking for a collectivity formed in our non-capitalist being-in-the-world, our relations to other human beings that maintain a sociality beyond and against exchange relations. We address Weeks’s open question by looking at the collective subject positions of possible and already-existing love relations in the world…

The Communism of Love is conceived of and written—like all of my other books and articles—as a contribution to new autonomist Marxist theory for the twenty-first century. Thus, I want to make a contribution to our understanding of the present limits and catastrophes of capitalism, the necessary abolition of capitalist society, and why we must find ways to do so without any resuscitation of the statist and otherwise failed so-called “communist experiments” and movements of the twentieth century. This means the exact opposite of ignoring the many triumphs and failures of the radical struggles of the twentieth century, for it means, precisely, a commitment to learning from them…

Because we live in a society ruled by money, governed by the logic of capital, it may appear to make sense to demand wages or salaries for all of the unpaid work that is done every day around the world. But only the most fundamental ignorance of capital would demand that capital pay for anything it isn’t profiting from. Capitalism has never paid people for their work, but only for units of time measurably disconnected from the actual quantity and quality of their labor, and from the real value of their work. We may get paid for commodity-producing work, yes, but a demand for the commodification of everything we do is not even a demand worth making. That is the defining demand of capitalist totalization, and we must beware its deceptive allure.

What if instead we could identify the communism of love in the relationships that matter most to us, in the relationships (or in our longing for the relationships) that make our lives worth living, that help us realize our personalities and gifts? The aspiration and practice of love relations with other people both points to (conceptually) and materializes (in our lived experience) a collective subject position beyond the liberal model, and critically, beyond capitalist logics and monetary valuations. Inasmuch as the communism of love is both necessary and actual, it is also only carried out by and for active subjects in pursuit of a sociality greater than that manifested by exchange relations. It is perhaps the experience and practice of love—more than anything else in a human life—that reveals the inestimable extent to which the best things under capitalism are the least capitalist things. There resides, in the irreducible communism of love, a rival logic of life that defends real people against commodification and that can only be expanded to the displacement of exchange value.

CHAPTER 1: THE LOGIC OF LOVE AS A COMMUNIST POWER

CHAPTER 2: PLATO’S SYMPOSIUM AND THE MANY POWERS OF LOVE

2.2 From Socrates to Spartacus: Love in War and Revolt

CHAPTER 3: THE LOVE OF COMMUNISTS

3.1 Capitalist Disfiguration: Grundrisse and the Community of Alienation

3.2 Jenny, Rosa, and the Significance of Revolutionary Affection

4.2 Danger and Hope of Despair

5.1 Unlike Loves: Racialization and Consumption

CHAPTER 8: CONCLUSION: FOR AND AGAINST

8.1 Love Against / Against Love