INSURRECTION: The Bloody Events of May 1937 in Barcelona (Excerpts) 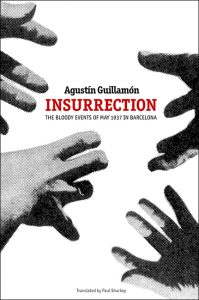 Our latest book by Agustín Guillamón is out: Insurrection: The Bloody Events of May 1937 in Barcelona. Like all of Agustín’s books, it is based on a ton of documentary evidence, including interviews and letters with some of the main players. And, again like previous books, it forces us to reconsider and rethink some of our well-worn ideas about the Spanish Revolution. The book is unique in that it takes an incredibly detailed look at a very short period of time—days really—during which certain important decisions and dynamics unfolded, changing the course of the revolution. Here are a few bits from the book’s introduction. Hopefully they will spark more interest in this revolutionary (in every sense) history. You can order the book here.

In and of itself, the investigation, disclosure and deepening of knowledge about the history of revolutions—rebutting the lies, misrepresentations and slanders spewing from Sacred, Subsidized Bourgeois History and lifting the veil from the genuine history of class struggle, written from the viewpoint of the revolutionary proletariat—is a Fight For History.

Workers’ striving to discover their own history is but one of the many battles being fought in the class war. It is not a matter of mere theory, nor is it abstract and banal, because it is part and parcel of class consciousness itself and can be classified as a theorization of the world proletariat’s historical experiences. In Spain it must, necessarily, embrace, digest and take ownership of the anarcho-syndicalist movement’s in the 1930s.

The mission of bourgeois History is to conjure up myths about nationalism, liberal democracy and capitalist economics in order to persuade us they are timeless, immutable and irreplaceable. A perpetual, complacent, uncritiqued present renders the past banal and is harmful to historical awareness. We are moving on from Sacred History to post-history. “Post-truth” is a neologism that describes a cognitive situation—commonplace these days—wherein the information-source creates public opinion by subordinating facts and reality to emotions, prejudices, ideologies, propaganda and beliefs. So post-truth can be a lie served up as a truth, but reaffirmed as a belief, ideology, promotional ad or prejudice widely spread throughout society. If it has the appearance of truth and also flatters our vanity or satisfies our emotions, while reinforcing our prejudices or identity, it deserves to be true. A good advertising campaign can turn lie, deceit and falsehood into a pleasant and handy post-truth. Post-history ceases to be what happens subsequent to the End of History (Fukuyama) and turns into the narrative that hacks of every hue and ideology fabricate for the publishing market, over and above the facts and historical reality that are these days deemed as secondary and dispensable, or exotic symbols for something we cannot quite out our finger on (Gallego).

The proletariat is drawn into the class struggle by its very nature as a waged and exploited class and does not need anybody to teach it anything; it fights because it needs to survive. Once the proletariat assumes the mantle of a conscious revolutionary class at odds with the party of Capital, it needs to digest the experiences of the class struggle, lean on historical gains (theoretical and practical alike), revolve issues not resolved in their time: it needs to learn the lessons offered by history itself. But this learning process can only be conducted through the practice of class struggle by the various affinity groups and sundry organizations of the proletariat.

Smoothing the way for this learning process is the point of each and every one of my books, the purpose throughout being to let the protagonists of history speak for themselves, respecting the reader’s judgment, while at all times highlighting the fact if she is dealing with the author’s opinion (indicated by italics) to which the reader need not subscribe.

The period of time covered by this book ranges from 3 to 7 May 1937. The aim, at all times and in every line, has been to allow the reader to form his own opinion about the events, speeches and proceedings underway, and of the positions of the different protagonists and the street-fighting. But documents never speak by themselves; they require interpreting, contextualization and explanation. If he is honest, the historian’s task is not merely finding and selecting them, depending on how apt they may be, but also to render them understandable, or placing them in their chronological and ideological contexts. To which end we have resorted to footnotes; but also, when the narrator needs to intervene in order to complement the information within the document or offer his own (inevitable and necessary) slant on the facts, we have made use of italics, because this addition to the document or this author’s interpretation, might be quibbled over and the reader need not buy into it.

Thus, italics are always used to show that the author is offering his own interpretation of the facts, in the hope of helping readers understand them, but also in the genuine hope of not confusing readers into believing that his is the only possible interpretation. Successful or not, the aim is absolutely to respect the reader’s judgment; at all times, the reader is at liberty and empowered to hold on to his own opinion of the facts set out here.

Chapter 5 is the product of the need to offer the reader a summary of the May insurrection that enables him schematically but very clearly and precisely to follow the revolutionary thread running through the CNT. In Chapter 6, there is a series of bold or not so bold interpretations that seek to offer an historical perspective on the defense committees and a de-mystifying critique of the Friends of Durruti, the concrete aim being, not to deify or beatify that organization, because so to do would be squandering its legacy and its life and historical experiences that are too important to be thrown away with incense and eulogy.

The bulk of the documentation used here is previously entirely unpublished and it has been taken from archives all around the globe, ranging from Stanford University in California to New York’s Tamiment Library, from the Russian Center for the Preservation of Contemporary History in Moscow, to the BAEL in Buenos Aires, not forgetting the BDIC in Nanterre, although the essential and richest archives have been those of the International Institute for Social History in Amsterdam, Salamanca’s Center for the Documentation of Historical Memory, the Tarradellas Archive in the Monastery of Poblet, Catalonia’s Arxiu Nacional, the Fundación Anselmo Lorenzo in Madrid and the Arxiu Enciclopèdic Popular in Barcelona.

Plainly this book is no mere anthology of documents bumped into at random, but rather a painstaking selection of telling documentary fragments that sometimes explain and sometimes contradict one another, but that are essential for any understanding of what was going on and what issues were burdening or concerning those men and women, whether they were leaders or at street level, helping the reader understand the times intensely, alerting him to the climate in which people were living, letting him listen in on the proceedings at meetings of the higher committees or at Generalidad cabinet meetings, so that he can garner an impression of the worries and fears of everyday life and be able to arrive in the here and now at a thorough knowledge of those events, now part of history.

Broadly speaking, the trading of information with other researchers dealing with the topics we have studied has been very gratifying and, without a single exception, it has taken place outside of academia, which is dominated by broomstick rigidity, neo-Stalinism, laziness, the whiff of incense, slave-driving, the most inane sectarianism, nationalism and manipulation. The works of Bernecker, Ealham and Godicheau command a mention and I would urge people to read them. And the same goes for the classics, such as Bolloten, Broué, Fraser and Peirats.

My status as a member of the Ateneu Enciclopèdic Popular is something I regard as a duty and an honor and, given the increasing disrepute of the profession of manipulator-historian, I would rather be described as a history-worker or collector of old papers, if that could avert unwanted confusion. The process of researching and drafting this book has meant a long road filled with adventures, the constant welling-up of new questions, liaisons and exchanges with third parties, interviews, bibliographical references, compilation of files and the hours upon hours whiled joyously away surrounded by dossiers and archival documents, and pleasant, educational launches of previous books. How can I convey the joys and pleasure to be derived from the solving of a puzzle, the satisfaction achieved once all the pieces of the jigsaw finally fit?

The writing of the history of the events of May 1937 can no longer blithely omit the decisive parts played by Josep Rebull, Pablo Ruiz, Jaime Balius, Manuel Escorza or Julián Merino, nor ignore the establishment of a secret CNT Revolutionary Committee. Although we must never under-estimate academia’s bottomless ignorance and its ferocious short-sightedness.

Naturally, I bear the responsibility for all errata and shortcomings, which should be brought to my attention at Apartado de correos 22010—08080 Barcelona, so that I can amend and learn from them.

Insurrection: The Bloody Events of May 1937 in Barcelona