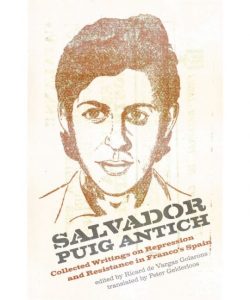 We recently published Salvador Puig Antich: Collected Writings on Repression and Resistance in Franco’s Spain, a book we’re very proud to have helped bring into the world. It uses the life and writings of Salvador Puig Antich as a doorway into an entire forgotten history of resistance to the authoritarian state. This uncovering in itself—the work of editor Ricard de Vargas Golarons and translator Peter Gelderloosis—is something to be proud of. But the book’s insights are not simply historical, they tackle questions of anarchist theory and strategy relevant to us today. Below is an excerpt from Peter’s Introduction to the book. You can purchase the book here: https://www.akpress.org/salvadorpuigantich.html.

It was the Juventudes Libertarias (FIJL), the anarchist youth, who reanimated many of the neighborhood struggles starting already in 1939, when Franco came to power in the entirety of the Spanish state. Starting as teenagers, a generation of youth who had not served in the militias and had not emigrated to France launched a campaign of bold actions, including rescuing hundreds of radical prisoners awaiting execution in Franco’s concentration camps. Throughout the ’40s and ’50s, the FIJL would be at the forefront of the resistance, just as they had during the Civil War after the CNT’s conservative turn in ’36.

In the meantime, though, most of the anarchist movement was in exile in France, where World War II had broken out in earnest. Catalan, Spanish, and Basque anarchists were instrumental to the French resistance, helping organize the partisans and liberating cities like Tolosa (Toulouse). In 1945, unaware that the future NATO countries wished an alliance with Franco, they expected the Allies to continue and sweep the fascists out of power in Spain as well. When the democratic West let them down, the maquis, or guerrilla combatants, kept on fighting. The CNT organized itself in exile in Tolosa and hundreds of militants adapted their smuggling routes over the Pyrenees to support a guerrilla struggle in Catalunya. There were also important guerrilla movements in much of the rest of the Spanish state, though they did not attain the intensity and penetration of the movement in Catalunya.

The guerrillas supported strike actions by workers, spread anti-Franco propaganda, sabotaged capitalist infrastructure, and organized assassination attempts against police figures or Franco himself. A key precedent to the MIL and the OLLA, they continued the practice of “armed agitation,” developed by the anarchist affinity groups in the 1920s. “Armed agitation” is wholly different from the strategy of “armed struggle,” in which a specialized armed group acts as the vanguard of the movement by constituting the nucleus of a future army (e.g. Castro and the 26 July Movement), serving as the military wing of a clandestine political party (e.g. ETA [Euskadi Ta Askatasuna]), or by carrying out the most spectacular actions and using its position to attempt to influence and direct a mass movement (e.g. the Red Army Faction or the Weather Underground). On the contrary, the groups that carry out armed agitation understand themselves to be simply a part of a broader movement, increasing that movement’s capacity for communication, self-defense, and self-financing by organizing and funding clandestine printing, attacking the forces of repression, and expropriating money from capitalists to support the families of strikers, prisoners, and the victims of the police. They also seek to generalize their practice rather than centralize it, distributing weapons among the lower classes and encouraging the horizontal proliferation of armed groups.

A key example from this period helps illustrate the difference. On more than one occasion, a group of anarchist maquis would break into a factory to assault an infamously brutal manager. Whereas a vanguardist armed struggle group would assassinate the manager in such a circumstance, the maquis would strip the manager down in front of all the workers, perhaps beat and humiliate him a little, and loudly warn him, for all to hear, that if word got to them that he continued to be abusive, they would come back and kill him.

The former action creates a spectacle, turning the workers into passive spectators and instilling in them the clear message that the armed group were the protagonists, the saviors, the ones who would deliver the solution. And for any workers who disagreed, perhaps the only saviors were the police, since there is little use debating with one who is better armed than you and executes their opponents.

The latter action, however, maintains the workers as the protagonist of the struggle, putting them on a stronger standing but making it clear that it is up to them to get rid of the bosses. In this view, the most important struggle is that of the workers themselves. It places a lower premium on illegal action and a more accessible ladder towards the more powerful tactics: not all workers are armed at a given moment, but with a little creativity they could all find a way to beat up their bosses. In this way, armed agitation creates a stronger complicity between everyone in the struggle, whether they are regular people trying to make a living and sometimes raising their voice in protest, or those who dedicate their entire lives to the most dangerous aspects of a struggle. Armed agitation makes it clear that everyone’s contributions are needed: the workers could be inspired to form their own such groups, or they could continue fighting in the workplace and the realm of daily life, fighting harder, more bravely, knowing they are not alone.

The difference in the lethality of the two actions is also significant. Though the practitioners of armed agitation—the affinity groups in the ’20s and ’30s, the maquis in the ’40s and ’50s, and the autonomous combat groups like the MIL and the OLLA—sometimes did take lives, they never did so lightly or gratuitously. This reticence towards executing those who could easily be identified as enemies is no small matter: anarchism has always distinguished itself as an ethical revolutionary current that does not make excuses for separating ends and means, and it is no coincidence that it has not resulted in the totalitarian States or systems of gulags and mass executions created by other revolutionary currents.

The anarchist guerrilla movement had far-reaching consequences that have been left out of a hostile historiography. In fact, anarchists who participated in the revolutionary experience in Spain, and then the resistance in France, and then the maquis, wrote one of the first chapters in the book on guerrilla struggles in the twentieth century.[1] Exiles who fled to Cuba, Mexico, and Uruguay shared their experiences with the movements that would blossom there over the next two decades; one exiled anarchist, Abraham Guillén, wrote one of the two principal manuals on urban guerrilla warfare. ETA got their first weapons from old anarchist resistance fighters who had fought Franco in Spain and Hitler in France. The Tupamaros and the Red Brigades got their forged documents from CNT counterfeiters. Many of those first armed groups on two continents after World War II followed an anarchist model, but some of them made key changes to prop up their vanguardist politics. Subsequently, these were the only groups to be remembered in the histories written both by establishment academics and by professed anticapitalists.

[1] Arguably, this experience constituted one of the two main roots. The other, arising in parallel and having more of an impact in the rural sphere, were the anticolonial struggles waged by Indigenous peoples as well as peasant/ bandit resistance throughout the world, which merged with anarchist movements in places like Mexico, India, Ukraine, and Korea.