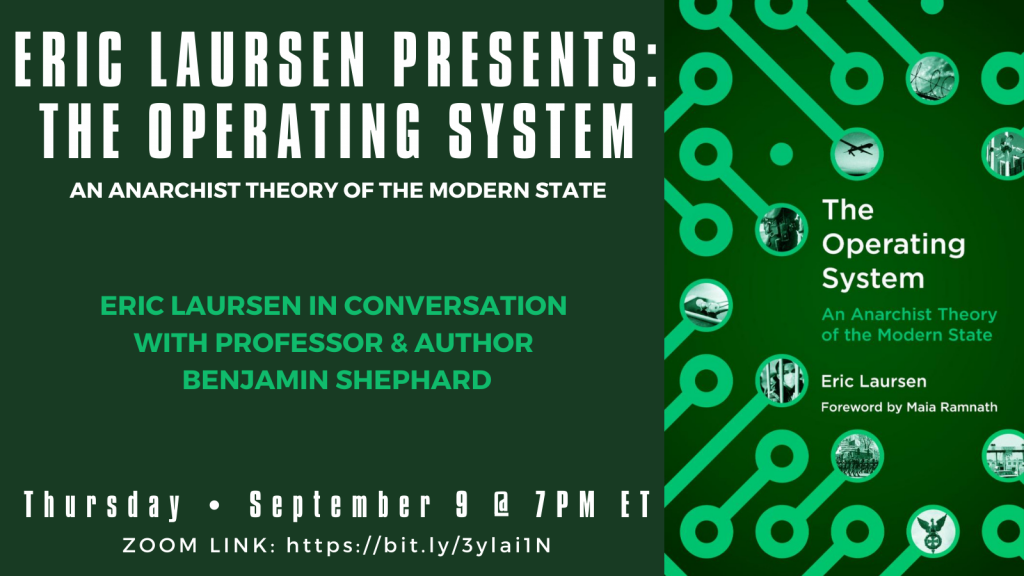 On Thursday, September 9th at 7pm ET, join the author of The Operating System: An Anarchist Theory of the Modern State, Eric Laursen alongside professor and author Benjamin Shephard.

A unique aspect of anarchism as a political philosophy is that it seeks to abolish the state. But what exactly is “the state”? The State is a vast operating system for ordering and controlling relations among human society, the economy, and the natural world, analogous to a digital operating system like Windows or MacOS. Anyone concerned with entrenched power, income inequality, disappearing digital privacy, climate change, the response to COVID-19, or military-style policing will find eye-opening insights into how states operate and build more power for themselves, in this book, along with perspectives on how we can learn to think outside the state.

“By what cunning perversion of logic and history has the modern capitalist State persuaded us that it is the only possible form of polity? Why do we passively accept its claim to inevitability and its lame excuses for the increasingly invasive surveillance of our private lives? How do the already powerful hide short-cuts to even greater influence and wealth across a ruined environment and vast stretches of poverty? In thoughtful, provocative, and engaging reflections on the modern State, Eric Laursen seeks deliberate withdrawal from the self-fulfilling mechanism he so appropriately calls ‘the operating system.’”
—Michael Herzfeld, Harvard University

Eric Laursen is an independent journalist, historian, and activist. He is the author of The People’s Pension and The Duty to Stand Aside. His work has appeared in a wide variety of publications, including In These Times, The Nation, The Village Voice, Counterpunch, The Arkansas Review, and Z Magazine. He lives in Buckland, Massachusetts.