G.D.H. Cole: A Libertarian Trapped in the Labour Party 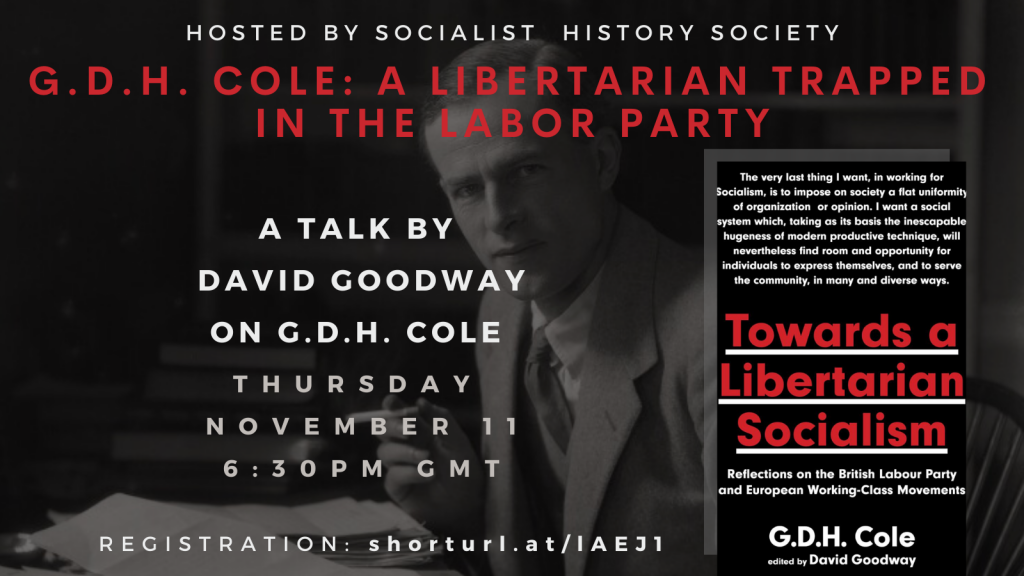 On Thursday, November 11th at 6:30PM GMT, join us alongside Socialist History Society for a discussion with David Goodway on G.D.H. Cole, a critical member of Britain’s Labour Party. Register here!

G.D.H. Cole (1889-1959) declared forcefully at the end of his life that he was ‘neither a Communist nor a Social Democrat…but something…essentially different from both’. He had been a leading Guild Socialist at the time of World War One and that, he explained, was what he remained. Cole repeatedly described himself as ‘a libertarian’. The current volume reconstitutes Studi sul Socialismo, a collection of late articles which supposedly appeared in Italy in 1959 but never did. David Goodway has reverted to the preferred title rather than the publisher’s ‘Studies in Socialism’. The talk will be followed by a discussion.

David Goodway is the editor of Towards a Libertarian Socialism:Reflections on the British Labour Party and European Working-Class Movements, by G.D.H. Cole, which is published by AK Press. The title of our talk comes from that of David’s introduction to this edition of Cole’s book.

David’s main works are London Chartism, 1838–1848 (1982) and Anarchist Seeds Beneath the Snow: Left-Libertarian Thought and British Writers from William Morris to Colin Ward (2006, 2nd edition 2012). In addition, David is the editor of collections of writings by Herbert Read, Alex Comfort, John Cowper Powys and Emma Goldman, Nicolas Walter and Maurice Brinton (Chris Pallis). He is also author of The Real History of Chartism: or eight fallacies about the Chartist movement (SHS OP, 2013) and editor of George Julian Harney, The Chartists were Right: selections from the Newcastle Weekly Chronicle, 1890-97 (2014).