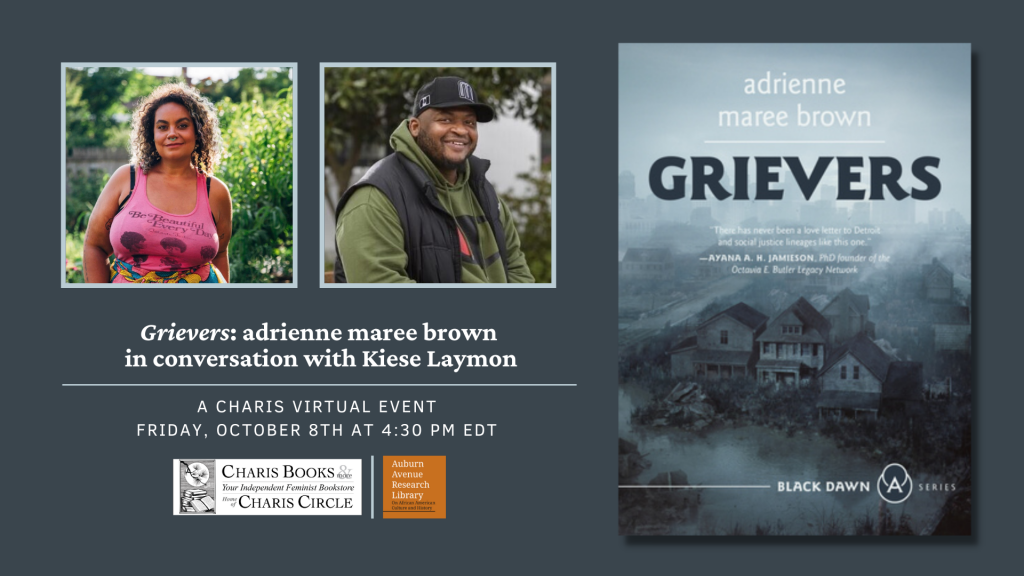 On Friday, October 8th at 4:30pm EDT, Charis welcomes adrienne maree brown in conversation with Kiese Laymon for a celebration of Grievers. Grievers is the story of a city so plagued by grief that it can no longer function. This event is co-hosted by the Auburn Avenue Research Library on African American Culture and History.

Register for the event here!

Dune’s mother is patient zero of a mysterious illness that stops people in their tracks—in mid-sentence, mid-action, mid-life—casting them into a nonresponsive state from which no one recovers. Dune must navigate poverty and the loss of her mother as Detroit’s hospitals, morgues, and graveyards begin to overflow. As the quarantined city slowly empties of life, she investigates what caused the plague, and what might end it, following in the footsteps of her late researcher father, who has a physical model of Detroit’s history and losses set up in their basement. She dusts it off and begins tracking the sick and dying, discovering patterns, finding comrades in curiosity, conspiracies for the fertile ground of the city, and the unexpected magic that emerges when the debt of grief is cleared.

adrienne maree brown is a writer and a student of the works of Octavia E. Butler and Ursula K. Le Guin. Grievers is her first novel. Her previous books include Octavia’s Brood, Emergent Strategy, Pleasure Activism, We Will Not Cancel Us, and Holding Change. Her visionary fiction has appeared in The Funambulist, Harvard Design Review, and Dark Mountain.

Kiese Laymon is a Black southern writer from Jackson, Mississippi. Laymon’s bestselling memoir, Heavy: An American Memoir, won the 2019 Andrew Carnegie Medal for Excellence in Nonfiction, the 2018 Christopher Isherwood Prize for Autobiographical Prose, the Austen Riggs Erikson Prize for Excellence in Mental Health Media, and was named one of the 50 Best Memoirs of the Past 50 Years by The New York Times. The audiobook, read by the author, was named the Audible 2018 Audiobook of the Year. Heavy was a finalist for the Hurston/Wright Legacy Award in Nonfiction and the Kirkus Prize in Nonfiction. It was named a best book of 2018 by the New York Times, Publishers Weekly, NPR, Broadly, Buzzfeed, The Washington Post, and Entertainment Weekly.