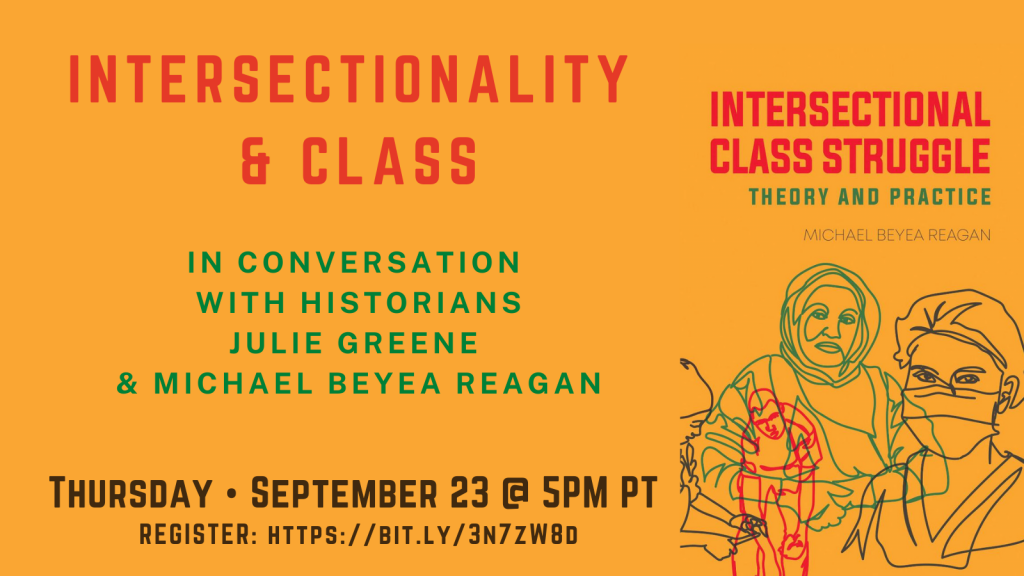 In conversation for the first time, historians Julie Greene and Michael Reagan will discuss class and intersectionality.

In the last fifty years, work on racial capitalism, materialist feminism, and Black feminism have transformed scholarship and activism on class and capitalism. But social movements and scholars have struggled to adequately grapple with the complexity of class and class struggle and what these ideas mean for twenty-first century class studies. In conversation for the first time, historians Julie Greene and Michael Reagan will discuss the ways in which class is in need of new theoretical foundations in both movement spaces and in scholarship. Grounded in intersectional theory, their approaches develop a class tradition to help address the biting problems of our era.

This talk will introduce Reagan’s new book, Intersectional Class Struggle: Theory and Practice, which argues that a rich and living tradition of intersectional class struggle is alive in working class movements today. The book shows that anti-capitalist movements that fight patriarchy and white supremacy are a long part of working class politics of liberation.

Julie Greene (@greeneland) is the author of Rethinking the Boundaries of Class: Labor History and Theories of Class and Capitalism, in the June 2021 edition of Labor: Studies in Working Class History of the Americas. She is is a professor of history at the University of Maryland, and the author of The Canal Builders: Making America’s Empire at the Panama Canal (2009), which won the OAH James A. Rawley Prize.

Michael Reagan (@reaganrevoltion) is the author of Intersectional Class Struggle: Theory and Practice, published with AK Press and the Institute for Anarchist Studies. He is a historian, teacher, and activist based in Seattle, WA; his writing appears in the Boston Review, ROAR magazine, Truthout, and other publications.