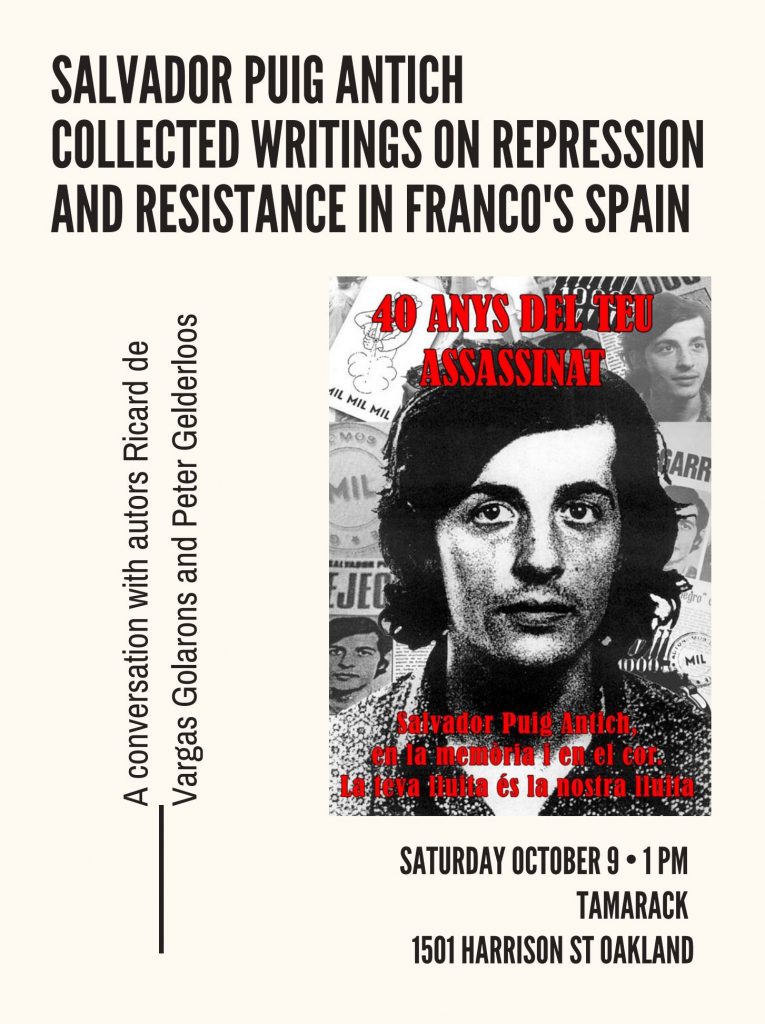 October 9th at 1pm head over to Tamarack in Oakland to be a part of a conversation with Peter Gelderloos and Ricard de Vargas Golarons on Salvador Puig Antich: Selected Writings on Repression and Resistance in Franco’s Spain!

In the early 1970s, Salvador Puig Antich of the Iberian Liberation Movement (MIL) was engaged in a fight to the death with Franco’s brutal fascist dictatorship over the future of Spain. They expropriated banks and smuggled clandestine literature in support of the growing movement of wildcat workers’ strikes. In 1974, the Franco regime garroted Puig Antich—literally strangled him to death. The charge was for shooting a policeman during his arrest, the details of which were contested. Puig Antich’s case became a cause célèbre internationally. This book makes sense of his life and death by placing them in their historical and political context. Some contributors describe the intensity of life in an armed group, others focus on the political debates in the MIL and the broader movement. Puig Antich’s comrades speak of the contemporary strike movement, his family members recount the wait for his execution. Sometimes perspectives clash, a testament to the conflicts, debates, and contradictions that form an integral part of this history of struggle. This edition also includes a new Introduction by Peter Gelderloos for English-language readers, as well as photos, documents, a glossary, and a selection of Puig Antich’s letters and other writings.

Ricard de Vargas Golarons, former member of the Movimiento Ibérico de Liberación and prisoner of the Franco dictatorship, is now a movement historian.

Peter Gelderloos is a translator and author of, among other works, Worshiping Power.