What Is The Modern State? A New Anarchist Theory With Eric Laursen 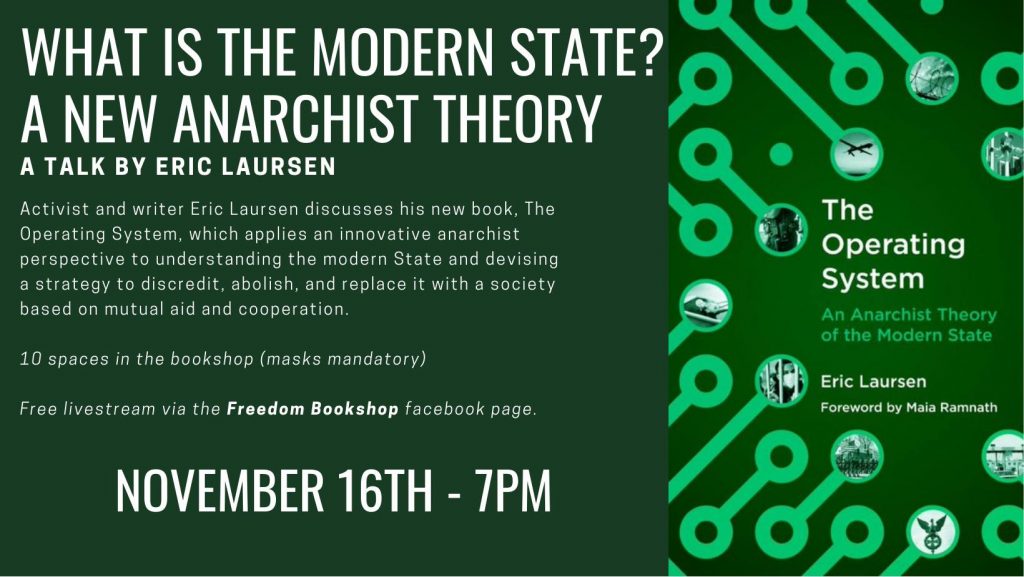 On November 16th at 7pm GMT join us alongside Freedom Bookshop welcomes writer and activist Eric Laursen to talk about his book The Operating System: An Anarchist Theory of the Modern State. Register here!

Please note: due to the on-going coronavirus pandemic only 10 people will be permitted in the shop for the talk. However: Freedom Bookshop will also live stream the event online via Facebook Live. For those attending in person, mask wearing will be mandatory. All those who are unable to wear a mask to watch the event using the live-stream.

What is the Modern State? A New Anarchist TheoryAnarchism is the only political tradition that fully recognizes the connection between capitalism and the State and completely denies the assertion that there is no alternative to either. As anarchists, we work to abolish the State and not to reform it. But what are the building blocks of the State? What drives it? How does it maintain its hold over us, and what does it intend for us? Eric Laursen discusses his new book, The Operating System, which applies an innovative anarchist perspective to understanding the modern State and devising a strategy to discredit, abolish, and replace it with a society based on mutual aid and cooperation.

Eric Laursen is a longtime activist, anarchist scholar, independent journalist, and the author of two other books from AK Press: The People’s Pension: The Struggle to Defend Social Security Since Reagan (2012) and The Duty to Stand Aside: Nineteen Eighty-Four and the Wartime Quarrel of George Orwell and Alex Comfort (2018).