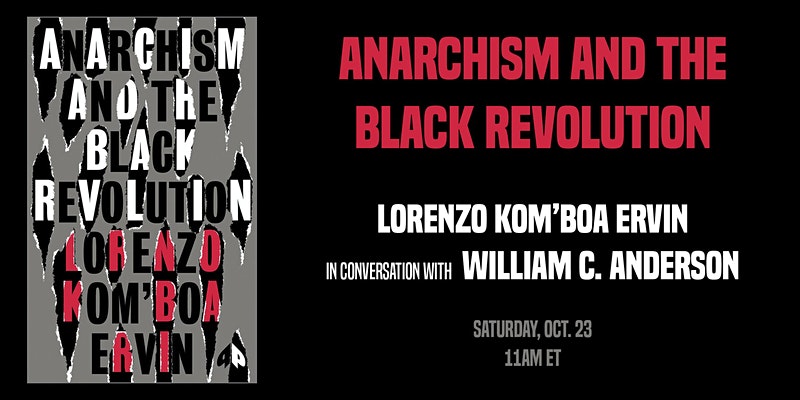 On Saturday, October 23rd at 8am PT/11am ET and join us alongside Lorenzo Kom’boa Ervin will discuss his book and its ongoing significance with William C. Anderson, who wrote the introduction to the new edition.

Anarchism and the Black Revolution first connected Black radical thought to anarchist theory in 1979. Now amidst a rising tide of Black political organizing, this foundational classic is being republished for a new generation.

Anarchist theory has long suffered from a whiteness problem. This book places its critique of both capitalism and racism firmly at the center of the text. Making a powerful case for the building of a Black revolutionary movement that rejects sexism, homophobia, militarism and racism, Lorenzo Kom’boa Ervin counters the lies and distortions about anarchism spread by its left- and right-wing opponents alike.

Lorenzo Kom’boa Ervin is an American writer, activist and black anarchist. He is a former member of SNCC, the Black Panther Party and Concerned Citizens for Justice. Following an attempt to frame him on weapons charges and for threatening the life of a Ku Klux Klan leader, Ervin hijacked a plane to Cuba in February 1969. While in Cuba, and later Czechoslovakia, Ervin grew disillusioned with the authoritarianism of state socialism. Captured by the CIA in Eastern Europe, he was extradited to the US, put on trial and sentenced to life in prison in 1970. He was introduced to anarchism whilst in prison, inspiring him to write Anarchism and the Black Revolution in 1979. Released after 15 years, Ervin remains politically active.

William C. Anderson is a writer and activist from Birmingham, Alabama. He is the co-author of As Black as Resistance (AK Press 2018) and author of The Nation on No Map (forthcoming this fall from AK Press).