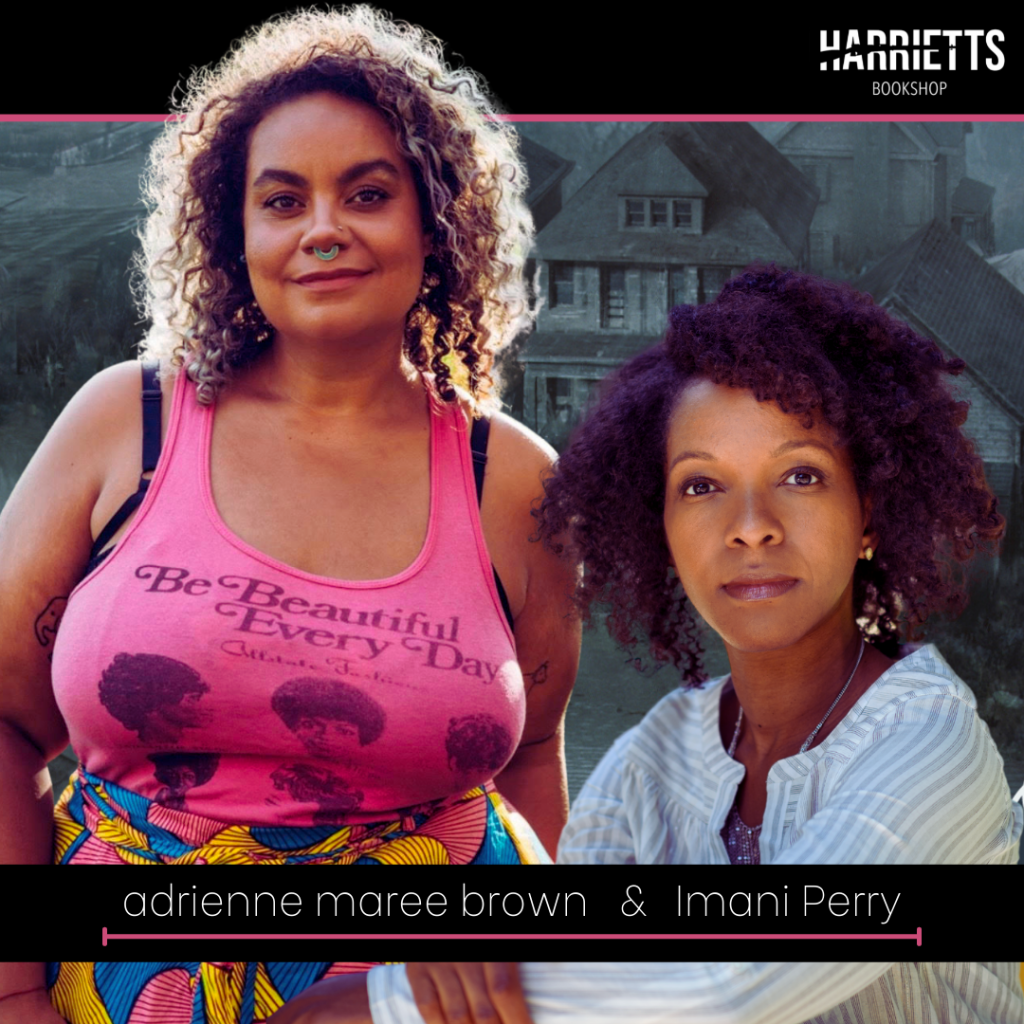 On Thursday, October 21st at 4:00pm PST/7:00pm EDT, join us alongside Harrietts Bookshop as we celebrate Grievers a new release from author adrienne maree brown in discussion with Imani Perry. Let’s explore the ‘issues’ that lie deep beneath the surface of what we read to learn life lessons, challenge stereotypes, and dig into uncomfortable truths for an enhanced reading experience.

adrienne maree brown is the writer-in-residence at the Emergent Strategy Ideation Institute, and author of Grievers (the first novella in a trilogy on the Black Dawn imprint), Holding Change: The Way of Emergent Strategy Facilitation and Mediation, We Will Not Cancel Us and Other Dreams of Transformative Justice, Pleasure Activism: The Politics of Feeling Good, Emergent Strategy: Shaping Change, Changing Worlds and the co-editor of Octavia’s Brood: Science Fiction from Social Justice Movements and How to Get Stupid White Men Out of Office. She is the cohost of the How to Survive the End of the World, Octavia’s Parables and Emergent Strategy podcasts. adrienne is rooted in Detroit. Grievers is her first novel. Her previous books include Octavia’s Brood, Emergent Strategy, Pleasure Activism, and We Will Not Cancel Us . Her visionary fiction has appeared in The Funambulist, Harvard Design Review, and Dark Mountain.

“Become so absolutely free that your existence is an act of rebellion.” – adrienne maree brown

Imani Perry is the Hughes-Rogers Professor of African American Studies at Princeton University and a faculty associate with the Programs in Law and Public Affairs, Gender and Sexuality Studies and Jazz Studies. She is the author of 6 books, including Looking for Lorraine: The Radiant and Radical Life of Lorraine Hansberry, which received the Pen Bograd-Weld Award for Biography, The Phi Beta Kappa Christian Gauss Award for outstanding work in literary scholarship, the Lambda Literary Award for LGBTQ Nonfiction and the Shilts-Grahn Award for nonfiction from the Publishing Triangle. Looking for Lorraine was also named a 2018 notable book by the New York Times, and a honor book by the Black Caucus of the American Library Association. It was a finalist  for the African American Intellectual History Society Paul Murray Book Prize. Her book May We Forever Stand: A History of the Black National Anthem, winner of the 2019 American Studies Association John Hope Franklin Book Award for the best book in American Studies, the Hurston Wright Award for Nonfiction, and finalist for an NAACP Image Award in Nonfiction. Her most recent book is: Breathe: A Letter to My Sons (Beacon Press, 2019) which was a finalist for the 2020 Chautauqua Prize and a finalist for the NAACP Image Award for Excellence in Nonfiction.