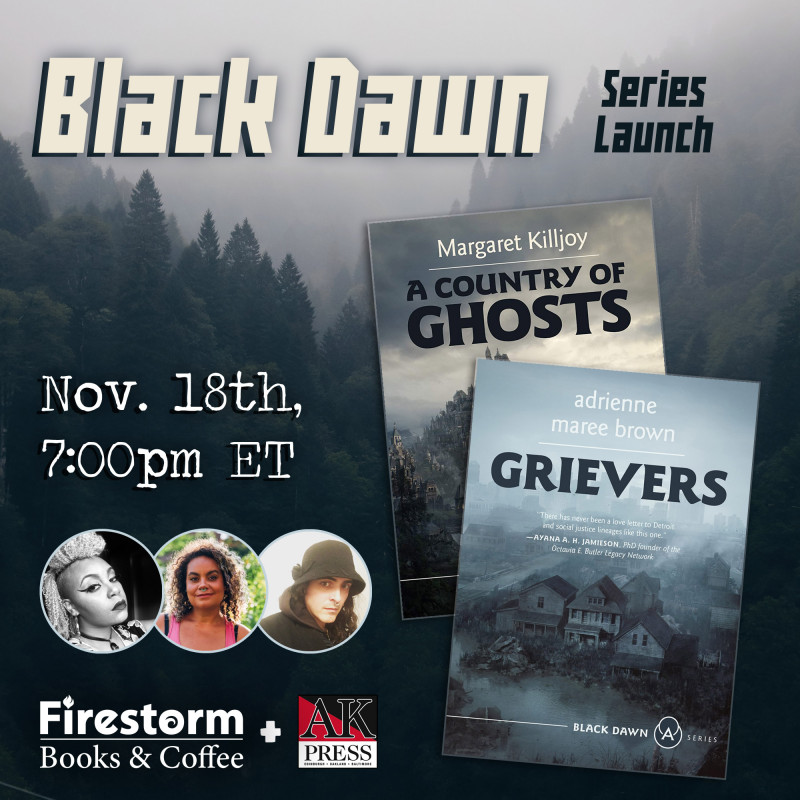 On Thursday, November 18th at 7:00pm ET, join us alongside our comrades at Firestorm Books for a panel discussion with editor Sanina L. Clark and Black Dawn series contributors adrienne maree brown (Grievers) and Margaret Killjoy (A Country of Ghosts).

Honoring anarchist traditions while also remembering the great Octavia E. Butler, the new Black Dawn series from AK Press seeks to explore themes that express the values of antiracism, feminism, anticolonialism, and anti-capitalism while not reinforcing dependency on oppressive forces (the State, police, capitalism, elected officials). Black Dawn is for queerness, Blackness, antifascism, and for both dreaming and building better worlds. With its natural creation of alternate universes and world-building, speculative fiction acts as a perfect tool for imagining various avenues that can be pursued to bring forth a just and free world.

adrienne maree brown is a student of the works of Octavia E. Butler and Ursula K. Le Guin. Grievers is her first novel. Her previous books include Octavia’s Brood, Emergent Strategy, Pleasure Activism, and We Will Not Cancel Us. Her visionary fiction has appeared in The Funambulist, Harvard Design Review, and Dark Mountain.

Sanina L. Clark is currently an instructor at Writopia Lab, a contributing writer for Publishers Weekly and A Gathering of Tribes Magazine, and the editor of the Black Dawn Series at AK Press. Though they have worked on various kinds of books, they prioritize acquiring texts written by or about people who are queer, trans, women, or POC. Their bookcase is filled with YA, fantasy, sci-fi, mystery, horror, plays and queer literature.