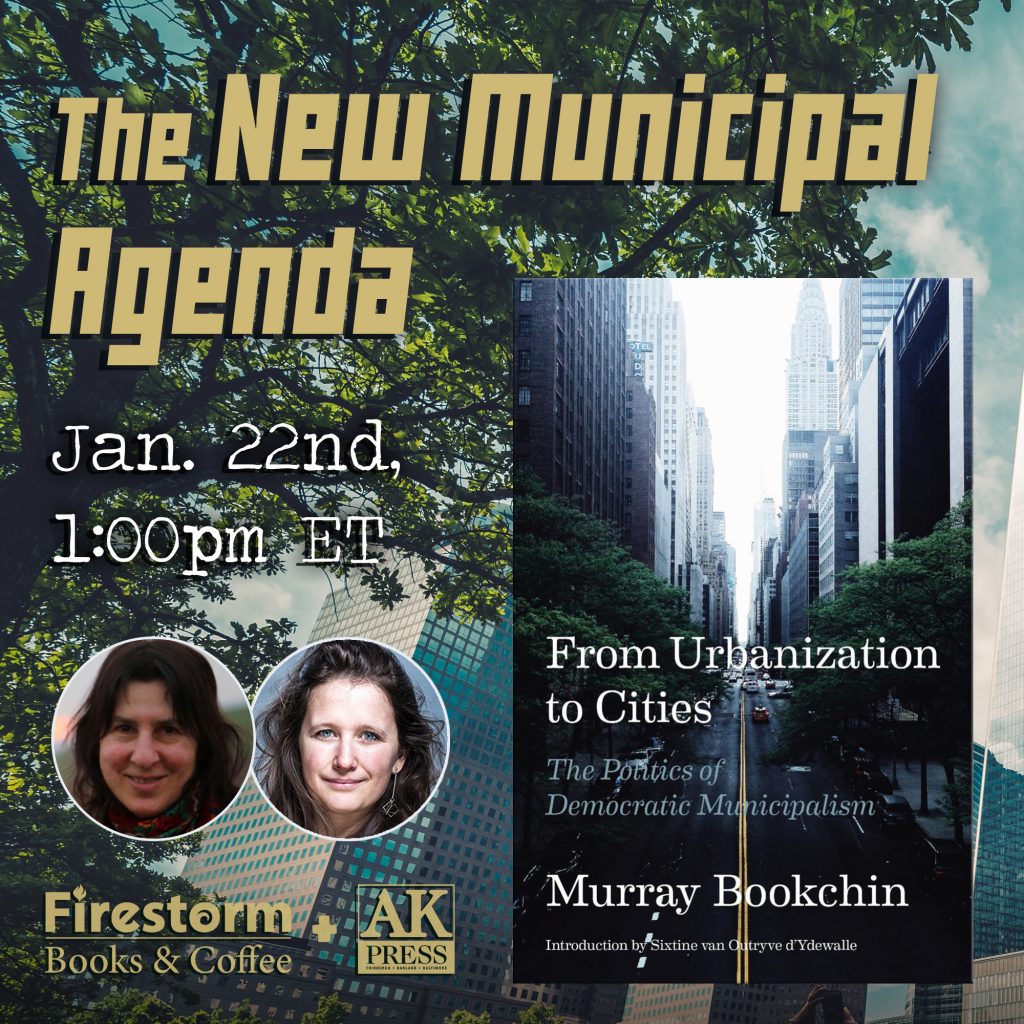 On Saturday, January 22nd at 1pm ET, join us alongside our friends and comrades Firestorm Co-op, author Debbie Bookchin, and PhD researcher Sixtine van Outryve d’Ydewalle for a virtual discussion on From Urbanization to Cities: The Politics of Democratic Municipalism by Murray Bookchin.

Register for the event here.

From Urbanization to Cities is a sweeping history of the city, not as a destination for capitalist exchange and individual gratification but as a locus for directly democratic politics. Just as ecosystems rely on participation and mutualism, so must cities—and their citizens—rediscover these qualities, establishing harmonious and ethical social relations. Democratic municipalism is an emancipatory philosophy of self-determination, where politics becomes an everyday act in which ordinary people and local communities take the power of decision making into their own hands. From the Paris Commune to the Kurdish-led revolution in northeast Syria, democratic municipalism is a tool for wresting power from the nation-state, allowing capitalist urbanization to give way to humanly scaled, ecological, and egalitarian societies. Includes a new introduction by Sixtine van Outryve d’Ydewalle.

Murray Bookchin (1921–2006) was an active voice in ecology, anarchist, and communalist movements for more than fifty years. His groundbreaking essay, “Ecology and Revolutionary Thought” (1964), was one of the first to assert that capitalism’s grow-or-die ethos was on a dangerous collision course with the natural world that would include the devastation of the planet by global warming. Bookchin is the author of The Ecology of Freedom, among two dozen other books.

Debbie Bookchin is an investigative journalist, author. She has published in The Nation, Atlantic Monthly, HarperCollins’ Best Science Writing and many other venues. She is coauthor of The Virus and the Vaccine (St. Martin’s Press, 2004) and recently coedited and introduced a new book of essays by her father, Murray Bookchin, called The Next Revolution: Popular Assemblies and the Promise of Direct Democracy (Verso Books, 2015).

Sixtine van Outryve d’Ydewalle is a PhD researcher in political and legal theory at UCLouvain in Belgium. Her research focuses on the theory and practice of direct democracy from a communalist perspective, specifically on social movements struggling for local self-government in France and North America.